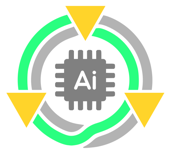 Industry 4.0 is one of the biggest industrial revolutions with the creation of new technology and artificial intelligence solutions. In this context, Autonomous Mobile Robot (AMR) is one of the reasons for expanding productive and logistical flexibility due to its adaptability to new environments. However, only recently the AMR has had greater acceptance, much due to its complexity and cost. In this sense, this article presents a ROS-based mobile platform to evaluate the possibility of navigation only with monocular cameras. The hardware and software stack structure will be detailed evidencing the most critical components for the success of the implementation of omnidirectional AMR. To ensure a reduced cost while maintaining the advanced ability to detect and change the trajectory whenever an object is detected during its path, it is proposed to use an artificial intelligence system to create an estimated depth image from the 2D RGB images. The system has been validated in several environments, its accuracy, and its ability to be evaluated. Finally, navigation using only the estimated depth will be demonstrated.